Hailing from the Central Coast of New South Wales – which is now a productive creative hub for country music artists – Sarah Humphreys has released her third album, New Moon, which is a glorious collection of songs, experiences and moods. Recently I spoke to Sarah, who was delightful, honest and inspiring.
I really love this line that was in one of the press releases saying, “I just get this niggle in my heart, and then the songs come out of me,” and to me that sounded like you trust your creative process, so I wondering did you always trust it?
I did, yes, it’s always been a very natural thing for me.  I’ve been writing songs since I was about eight, so I’ve spent a lot of time developing that little inner voice, I guess – or just that thing that comes from somewhere else and you’re not quite sure where it is, that creates things out of thin air, so I’ve always been very connected with that part of myself since I was a little girl.
A lot of people can talk themselves out of trusting that though, so even for it to come through when you were young, it could have felt like it was weird or just you wouldn’t necessarily know what to do with it. Did you come from an environment where you might have learnt to trust that?
Yeah.  That’s a really good question.  I have a very beautiful, soft, loving mum who would just do anything for me or my brothers, and if she could see that we were happy, then that was all that she needed, and we were able to follow what we wanted to do.  Me, being the youngest, probably even more so than my big brothers, and I just feel like I was never afraid of being the weird one, I wasn’t afraid to do that, I liked not fitting in, I was quite comfortable with that, so if I was off writing my little songs and wearing my funny little clothes, then I was really comfortable and happy doing that.
It sounds like you might have been one of those children that adults say of, “Oh she’s been here before.”
I have had people say, “Oh, she’s an old soul”, and I’m like, I don’t know, I thought I would have had a bit more of an idea about other stuff [laughs] but when it comes to writing, I guess maybe I’ve been here before.
It sounds like you had a strong sense of self, and obviously that was helped by your family, it also through just being comfortable, being different, because when you’re a kid in primary school and high school, there are so many forces that especially for a young creative child would want to pull you away from that.
Well, I just dove right in and anything that was weird or strange, I was into, and I liked wearing strange clothes and I was definitely an outcast by choice. I liked that about myself.
So what sort of music did you grow up listening to?
When I was really, really little, I listened to a lot of country and western music with my dad, so some Hank Williams, Willie Nelson, he loved a bit of Boxcar Willie [laughs]. And we used to listened to that driving around in his big brown Ford Falcon, and that’s a very fond memory that I have.  I didn’t spend a heap of time with my dad, I spent more time with my mum, but when I was with my dad, I remember those moments, and they were really lovely.  And then as I got a bit older and listened to Mum’s records, I really got really heavily into The Beatles and ELO, Electric Light Orchestra, and that real poppy sound, so those two things combined is kind of what I loved to listen to.
And I can hear those influences in your music. It’s really hard to write a catchy song and it’s really hard to make songs immediate for the audience, but yours are really catchy and memorable in that pop way.
Thank you.
Well, it is true, it is hard to do them, but you’ve also got that depth of lyricism that comes from the country side, and especially that older country which is a little darker. So that’s the end of my question [laughs]. I can hear your lineage basically.
That’s good, and it’s a very – it’s a good one [laughs].
So just back to the songs on the album, when they poured out of you, how long did it take? 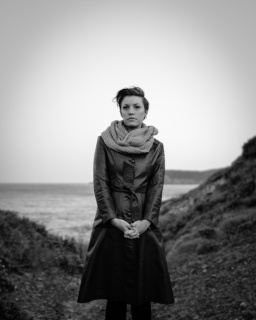