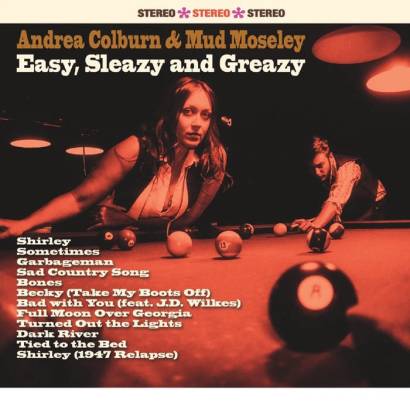 On the ‘about’ page of Andrea Colburn and Mud Moseley’s website there is this: The King and Queen of the Hillbilly Underground from North Georgia – which is a declaration and a story all in itself. In this way the statement is a very suitable introduction to Easy, Sleazy and Greazy, the new album from Colburn and Mud Moseley.

There are stories galore on this album, some of them exploring dark underbellies and darker emotions, some stepping straight into the toe-tapping traditions of country. Colburn doesn’t so much sing as you call you in, to pay attention to her (although she does have a great singing voice). She’s accompanied by guitar parts – presumably played by Moseley – that have their own stories, although at first you’ll want to listen to Colburn’s voice telling you what’s what.

This is not a beginner’s introduction to country music, particularly if you’re used to lyrics that sound like a repeat of so many other love songs. This is country music for those who love the storytelling side of country, and the side where people aren’t afraid to bring their real selves to their work. Colburn and Moseley seem so real that they could set up their gear in the corner of your living room and play just to you, and you’d think they’re singing just to you, but in the way of true artists their work is not only intimate but universal, familiar and strange all at the same time.

Easy, Sleazy and Greazy is out now.