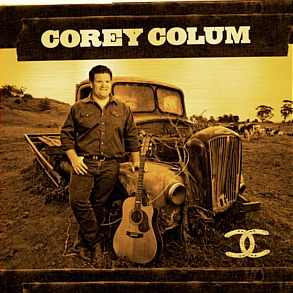 Corey Colum hails from Western Australia – a long way from the country music capital, Tamworth, but not a long way from its musical traditions. Colum’s debut album is a well-rounded affair that is sure to please country music fans with its balance of driving tunes and softer songs – there are songs to drive to and songs to sing to, and plenty of that country-music storytelling that characterises the best songs in the genre.

I met Corey during the 2012 Tamworth Country Music Festival – he had a hectic media schedule so I was lucky to get a slot, and I expect he’ll be even busier at future festivals!

So, you’re from Karratha originally or – no, Bunbury.
Yeah, originally from Bunbury, Australind. I grew up down there and then me and my wife moved to Karratha four years ago, so I’ve been over there.

Because you liked the look of the place or …
For work mainly, for work. Yeah, because the almighty dollar was – we thought we’d go up and have a go.

Oh, so the mining boom lured you there?
Yeah, pretty much, yeah. Thought we’d have a crack … the Telstra Road [to Tamworth] was 2009 and that sort of just made everything bigger and better as it was going along.

So you were first noticed during the Telstra Road to Tamworth and the People’s Choice or Audience Choice Award, and then somewhere off the back of that you were offered a recording deal. Your album’s just come out – it’s January 2012 – that’s pretty quick.
Yeah. I honestly thought it would have been quicker! I signed in 2010, I think, so I’ve been signed for two years and I thought it would just roll on. But I’m very happy that it’s come out now, because it’s given me some time to just get used to it and because I feel more comfortable within myself too. Playing -because I’ve played a lot in Karratha since then as well, so it’s been good.

So, you’ve been playing for the miners or the mining crowd? Are they a tough audience?
They’re pretty good. Look, it’s been really good up there actually. It’s not a huge country scene but people will see you as a local so you get a lot more …

That surprises me that it’s not a big country scene. Is it because there are a lot of people who aren’t from the area and they bring their tastes of music in and they probably like rock?
Yeah, definitely.

Listening to your record, it’s kind of an all-round record – there’s lots of different stories told on there – but your voice, it sounds to me like you could have been a crooner.
Oh right [laughs].

And you don’t have a belt them out, it’s not a kind of ‘I’m straining to get the note, I’m trying to cover up for the fact that I can’t sing’.
Thank you, yeah.

So has it always been country music for you?
Yeah, pretty much.

What did you grow up listening to?
John Williamson, Alan Jackson, Hoodoo Gurus even, I really like Hoodoo Gurus. Yeah, what else? Lots of things come and go. I really like a lot of songwriters, like John Ryan, Robert Earl Keen, Fred Eaglesmith, that sort of stuff as well. I really love the stories behind them. So, yeah, Troy Cassar-Daley.

What’s not to love about Troy?
Yeah, that’s right.

Oh well, maybe in the future if you decide that country’s too loud for you, you could go to the crooning.
Might give it a crack actually. No one’s ever said that.

Well, sometimes people’s voices can only suit one thing. And sometimes there are voices that you can hear could go another direction if the music were different. And yours just sounded like you had the rounded edges on it that it could suit other things if you wanted to. But maybe when you’re 60 or 70 you could do a Michael Bublé.
I wouldn’t mind doing the Bubble. That’d be all right.

I often think singing out the front of a band is hard work if you’ve got to be loud.
I haven’t done much stuff in front of a band. Most of my gigs and that have been – up in Karratha have been just by myself, so solo work is mainly what I’ve done. So, getting into a band is something I’m looking forward to as well, getting a band behind me, and working with a band.

Up here [in Tamworth] are you doing you and the guitar or with a band?
All the meet-and-greets are solo and then the Diggers gigs are with a band.

So how did you put the band together?
Mark Donahue, who’s The Sunny Cowgirls’ manager, he’s been helping me through the whole thing. So, I spoke to him and he put me through Rusty Crook and he’s got a couple of guys … So, yeah – it’s really good fun, I’m looking forward to it.

So you’re playing with them here for the first time?
Yes.

And presumably you need to rehearse – what kind of rehearsal space is there in a town like this at this time of year?
Not much and everyone – they’re all flat out, too. So it’s really hard. So they’ve been learning my songs for a few months now and then we’ve got to get together Saturday morning, before the gig.

But I think that’s the nature of Tamworth, is that that there are a lot of musicians who are playing around the place.
Absolutely.

So they can hit their marks, they come in and they’re like, ‘Okay, I know your stuff’.
Yeah, and even with – like, doing my album and then the rest [are] covers, so I’ve given them all the tracks and they would have played the songs a hundred times before too.

Are you feeling nervous about ‑
Yes [laughs]. Very much so.

I think the trick is if your rhythm section’s got it, you can relax because they’ll take the heat for whatever goes wrong.
Yeah, yeah, that’s right [laughs]. It should be good fun.

It must be exciting too.
It is, it is.

I know you were saying you were signed in 2010 so it does seem longer, it’s still only three years since you were here doing Road to Tamworth.
That’s right, yeah. The year 2007, I was in college, CMAA College. So the first year that I did Tamworth [was] 2006. We drove across and had a look around and then ‑

So, you drove across the Nullarbor Plain?
Yeah.

That’s commitment.
Then I was living in Australind so we didn’t have to go the extra 1600 ks up to Karratha. So we’ve flown the last couple of years.

Have you come across other people who’ve driven that far?
Yeah, yeah, the first year we did because we stayed in the caravan park up the other side of the river and the cricket club and met a lot of people that travel over here. I was talking to another guy at the paper, the photographer, and he was saying a guy from WA is here and he’s been here since November just cruising around. They stock up, I think, and get things fixed on their vans and all that sort of thing. So it’s interesting.

Well, it’s that dedication, that country music dedication that is really extraordinary.
Yeah, it would be.

But it also means, I think, that when you are starting out in a career, because people love the genre, they’re actually, I think, much more willing to accept new artists. It’s not like we only listen to Kasey, we only listen to Troy. It’s like, okay, you’re new, you’re playing country music, great, we’ll listen to you.
Yeah, which is good, good for people like me.

Well, that’s right. So, when you came here before you were performing and hoping to make a career out of it, was it – who were you thinking ‘that’s the sort of career I’d like to have’?
Anyone that makes a career out of it really. Anyone that can have a – have their lifestyle around music and support the family, because that’s what I do, if I can support my family playing music and travelling – that’s the ultimate for me I reckon. So, Troy Cassar-Daley, John Williamson, he’s been doing it for how long now? And to keep doing it and keep bring good albums out, that’s – that would be great to be able to do that.

Stay tuned for Part II of this interview.