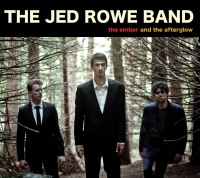 This is the second part of an interview with the wonderful Victorian singer-songwriter Jed Rowe. The first part can be read here. The Jed Rowe Band’s new album, The Ember and the Afterglow, is one of the best releases in recent memory (well, I think so).


In this part of the interview Jed talks about how his band came together and also about the songwriting process, and what’s great about Melbourne for musicians.

You’re a New South Welshman by upbringing and you’ve defected south of the border. Do you find Melbourne to be a more supportive creative environment, particularly if you’re an independent artist? I’ve noticed that your CD has got a bit of funding from Arts Victoria.
I’m not sure about in terms of government because I’ve never applied for sort of arts grants or anything. I never did that when I lived in New South Wales. I think Melbourne is definitely a much bigger scene probably than anywhere in Australia, I think, in terms of music. So whatever kind of music you’re into there’s probably a pretty good team going on in Melbourne. I think it just helps; it helps for the quality of it. You need be around people who are doing really good stuff and it can work, in terms of it being a supportive scene, it can kind of lurk the other way too; I think in Melbourne, to an extent, that there’s so much good stuff going on that it’s hard to kind of stand out from that crowd because it’s a big crowd [laughs] whereas when we first started touring we would kind of often have better responses interstate than some of our Melbourne gigs, just because you’d go to some country pub and they’re like, ‘Oh, wow, you guys are great. This is good.’ They don’t get as much good music going there, I guess. So in Melbourne audiences can be a bit spoilt for choice and it can be a bit hard to be impressive [laughs] maybe.
And do you feel like you’re part of the country music community? One of the things I love about Australian country music is that it is quite a supportive community in terms of new artists in particular. People in country towns will turn out —if you say you’re a country music performer they’ll turn out for you. For me you fit completely within a sub-genre of country, so it sounds like country music to me.
That’s interesting. Like I wouldn’t say I’ve set out to be a country artist or a blues artist or a folk artist or a rock artist or whatever, but I guess I just love good songs and I tend to like a wide variety of music, and that tends to show up in the songs that I write. And the country has kind of been more of a thing of the last few years, as far as listening goes, I just sort of come across some really great songwriters, stuff like Gillian Welch and I love the album that Kasey Chambers and Shane Nicholson did together, Rattlin’ Bones, and things like that — perhaps you would call them old country, I don’t even know. I know it’s necessary to categorise music but I always find it hard to put it into words or categories’.
I guess one of the main reasons why I think of your music as country is that country music, more than any other genre I’ve identified, is a storytelling genre.
Absolutely.
And it’s what the audiences expect. In country shows you get a lot of talking between songs because the artist is setting up the song, in a way, because they understand they’re telling a story. This album is like reading a collection of short stories — it’s the most literate album I’ve heard in that sense —and you seem to really understand that role of being a storyteller, that cultural role of being a storyteller.
Oh well, that’s a good – good compliment to get. I think that’s one of the things I would set out to do. When I first started actually listening to more country stuff that was kind of why, I guess, just because it’s where some of the great songwriting was going on.
www.jedrowe.com