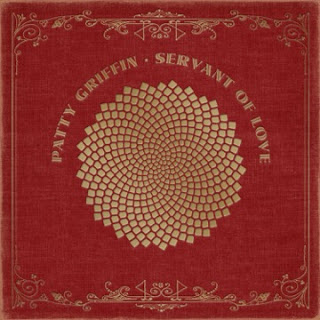 Somewhere in the universe there is a law of physics which states that Patty Griffin must always create wonderful albums. Perhaps, in its simplest form, it looks like this:
Patty Griffin + songwriting = joy
Or this:
Patty Griffin + singing + creativity = perfection
Regardless of the equation, the newly released Servant of Love, Griffin’s tenth album, is the proof. Over the course of Griffin’s career, during which she has mostly released music that she’s written herself (the exception being Downtown Church, which was mostly comprised of songs written by others, with some jewels by Griffin), she has demonstrated that each new album is a consolidation of and progression from her previous work. In this way her work is not only rewarding for long-time fans but also a gift for new listeners, who are coming across a mature, thoughtful, self-aware and educated artist no matter which album they pick up.
Servant of Love contains evidence of Griffin’s country/Americana roots (although ‘Americana’ has always seemed too limiting a term for what she does – no one genre can contain her) as well as blues, jazz and African influences. This pedigree serves the songs rather than the other way around.
Griffin has the gift of being able to create songs of exquisite poignancy – the title song of this album amongst them, as well as ‘Rider of Days’ and ‘Shine a Different Way’; sometimes I think that the sound of heartbreak is Patty Griffin’s voice. Yet she can also deliver songs of stomping, driving rhythms that wouldn’t be out of place in a hootenanny (‘Gunpowder’, ‘There Isn’t One Way’), or songs that sound like she’s about to round you up and teach you a lesson (‘Hurt a Little While’). She doesn’t tell stories so much as create worlds, and the collection of those worlds is the universe that contains that aforementioned law of physics. Each album of hers feels like a benediction. Servant of Love is the latest, and we are fortunate to have it.
Servant of Love is out now through Cooking Vinyl Australia.
www.pattygriffin.com