As she heads into the 2016 Tamworth Country Music Festival, Tori Darke takes a new single, ‘Silver Lining’, with her, as well as a nomination for the 2016 Female Artist of the Year. Recently I spoke to Tori about the single, her album of the same name, being an independent artist and, of course, Tamworth. Tori will appear during the festival on Tuesday 19 January at Wests Diggers, 3 p.m. 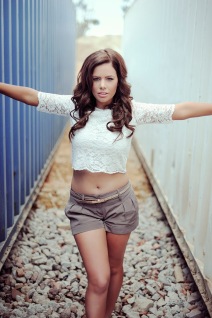 willingness to have it. I think if you and other artists who have done this weren’t interested in pleasing your audience or even having much to do with them, yes, there’s a risk that you put out an album that they don’t like. But when you’re responsive to your audience, when you’re in Tamworth playing shows – I think you did three shows in 2015 – that means you’re making that connection and you’re really respectful of what they want, and it would therefore be hard to put out something that they don’t want, because you know what they want. Does that make sense?

Yes, it totally does. You know what your fans expect from you, to a certain degree that it’s okay to change it a little bit, but not to the point where they’re saying, ‘We don’t recognise you – what are you doing?’ You always want it to be to the point that your fans hear your voice and say, ‘That’s Tori Darke – that’s a new song’. But at the same time there are good moments when you can change yourself a little bit, change your style a little bit, and they will go with you.
So what’s next? Are you planning a new album? You’re planning some tour dates in 2016 but I would imagine you also have some writing and recording in mind.
Definitely. I want to be writing and recording. I’d love to go back to Nashville to plan for a new album. It’s really just one of those things where you have to take each day as it comes, and for me 2016 really holds a lot of touring and I want to get back into the studio and I want to start writing again and just being really, really active with my career.
But there’s a lot to do, isn’t there – social media, for example. When you’re an independent artist you’re also your own manager as well as your own record label manager. So do you have a very organised diary?
I do have a very organised diary but sometimes it can go all over the shop. When you’re an independent artist you are your own boss, your own manager – you’re everything. So you have to have your head screwed on pretty tightly. I work a full-time job as well as being a full-time musician so a day off for me is very, very rare, unfortunately. You have to have all you ducks in a row so that when the time comes that you need to do something or you need to be somewhere, you’re there without any hesitation.
If you’re working a full-time job as well then maybe you can’t get a lot of time off for Tamworth. Can you tell us about your own show and whether or not you’ll get any time off to see any other shows?
I have one ticketed show in Tamworth which I’m absolutely thrilled to be doing again. The show is me and Mick Lindsay, co-headlining. We’ll do a two-hour show where Mick will be opening and I’ll be closing. We’ve also got the beautiful Rachel Farhim – she’s doing the support. Then I’ve got a few different things here and there. Little guest spots for friends and things like that, helping out a little bit. But other than that I plan on relaxing and enjoying myself, because I never do and you always usually end up run off your feet, and of course I’ll be doing radio interviews and things like that as well, but I do plan to take a bit of time just to listen to some music because that’s what we all want to do as well..