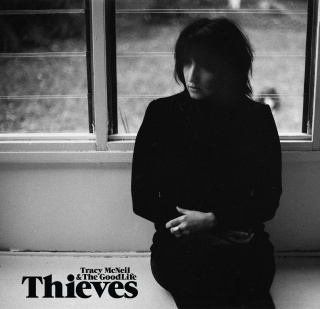 Thieves – not Tracy McNeil’s first album but her first with band The GoodLife – opens with an invitation in the form of a song called ‘The Valley’. The music, Tracy’s voice, the pace of the song all beckon the listener to come closer. The song suggests that good things await if the listener will just hang around; they’ll be fun things, interesting things, perhaps beautiful things.
That song doesn’t lie, for Thieves is all of those. That’s not to say that all the songs are like ‘The Valley’. In fulfilling its promise, McNeil and her band deploy a range of moods, stories and instrumentation to deliver an album that has moments of musical exquisiteness as well as of toe-tapping joy.
McNeil’s influences range across country, rock, pop and folk; she seems to be able to intuit what’s right for each song without forcing any phrase or lyric, chorus or bridge into an awkward place. All the pieces fit just where they should and not always where you’d expect. For one thing, McNeil is a Canadian now resident in Melbourne, but this album has a distinctly Californian feel to it: a sonic illustration of canyons, winding roads and convertibles, deserts and palms.
One of the reasons why this laidback feel never slides into laziness is McNeil’s voice: she sounds like a person who’s not interested in wasting time, or in spending time on things that aren’t important. Her tone is mellow yet direct; there is depth and empathy. She’s there to entertain and to tell a story. She sounds like she could stop at any moment to crack a great joke or share a sad tale, and both would be appropriate.
Thieves has layers that reveal themselves with repeated listening, and it can also serve as an album to float away on. McNeil’s experience as a singer, songwriter and performer – and the high calibre of her band – have resulted in a creation of easy complexity: a contradiction in terms, and a wonder to behold.
Thieves is released on 1 July 2016 on SlipRail Records through MGM Distribution.
tracymcneil.com