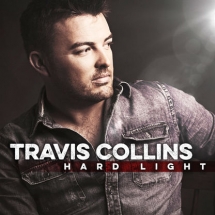 I’m just going to say it: I’d rather listen to Travis Collins than Keith Urban, and I have been a massive Keith fan in the past. But when it comes to solid country rock performed with an ability to sing a sweet note and make it sound authentic, I’ll take Travis.

Over the course of his last four albums Travis Collins has built his audience and his skills, honing what works for him – and what he’s great at  – and leaving the rest behind. So it is that on Hard Light, his fifth album, he’s presenting an accomplished piece of work that is personal – Collins wrote twelve of the album’s fourteen tracks – and also entertaining. The way he achieves this balance is by being authentic: what he’s telling us is true, and it’s also true that he loves to entertain. He’s found the way to do both so that it rewards the listener with an album that is very satisfying for those of us who love country rock (which is a genre that can get trammelled by those who practise its lesser cousin, ‘bro country’, and is not to be confused with it).

Collins has such a good voice – deep and masculine – that he could sing a shopping list and get away with it, but the material on this album that brings out the nuances of his voice and also lets him belt it out when he wants to. Collins is an important fixture in Australian country music: he plays and writes from the same place of commitment to country and passion for music that many other artists have, and he’s offering something that has enough difference to give him a niche. It’s a niche I hope he stays in for a very long time.

Hard Light is out now through ABC Music/Universal.
www.traviscollins.com.au