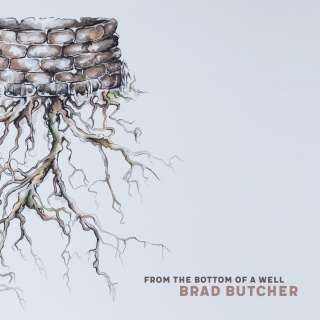 If, like me, you have loved music for as long as you can remember, and even been obsessed with certain albums and artists at various times, your affection sometimes waning but generally keeping faith with those you have loved most, you’ll have been lucky enough to feel the rapture that comes with discovering someone great, looking forward to their next release and being rewarded for your anticipation.
Brad Butcher is a Queensland singer-songwriter whose first album still has me in thrall. His second album, Jamestown, proved that the first was no fluke. Butcher is a terrific songwriter, and, yes, he can sing and all that good stuff. But some artists have magic in them – almost a sorcery that can make you think of their songs at the oddest times and all the emotions that those songs conjure are as strong as they were the first few times you heard that particular combination of notes and words.
That is a kind of brilliance, and it’s also something that can’t really be defined, otherwise we’d all know what it is and go and pluck it from a shelf somewhere. Songs from both of Butcher’s albums still make me stop and listen, and occasionally cry too, even though I know them well. His stories are not complicated but they are meaningful, and there’s enough meaning in them to merit going back to them over and over, because they can deliver it each time.
So, listening to Butcher’s third album, From the Bottom of a Well, for the first time, I obviously had expectations, while still trying to approach it with an open mind. I did not actually want a repeat of either of the first two albums, because they’re perfect as they are – and that’s lucky, because I didn’t get it. Instead, From the Bottom of a Well is a beautiful evolution of Butcher’s skills and sounds. One of his constant strengths has been has willingness to be emotional without being manipulative of his listener. He does not write songs to provoke a response – he tells the story as it is, and brings in whatever emotion is there without second guessing what’s going to work (or perhaps he’s just honed his craft well enough that the guessing gets eliminated early in the process). That is the authenticity that the country music audience loves, which is why he’s found a home there.
His music is also a huge compliment to his listener: he is saying to us that he trusts that we’ll understand what he’s telling us, and he’s inviting us into the experience. The compliment is also there in how he sings: he has always had crisp articulation married with a warm tone, and that combination, again, is an invitation to the listener.

The songs on this album are a mixture of personal accounts (‘All Said & Done’, ‘More to the Story’) and other people’s stories (‘Glasgow Train’, ‘Well Dressed Man’), and there is no sense that Butcher values one over the other. He understands his role as a storyteller, and he has always been adept at serving the story and the song.

These are also songs that grow in impact with each listening – several of them become more moving with time and consideration. That’s due to the layers within them lyrically, and within Butcher’s voice, and also, perhaps, those introduced in the recording process. Butcher’s producer for this album is Matt Fell, who has given it a different sound to that heard on the previous two albums, with more texture and light and shade. These elements give the listener cues, but none of that matters if the songs aren’t working. They do – every single one.

This is another album that will make me stop and listen for years to come, and as someone who has loved music for as long as I can remember, that is just the best thing ever.

From the Bottom of a Well is out now.
iTunes
Amazon
bradbutcher.com