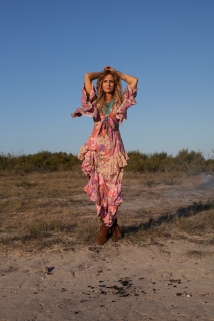 The Gympie Music Muster is one of Australia’s most popular festivals. Held each year in Amamoor Creek State Forest in the Queensland Sunshine Coast Hinterland, it’s two hours north of Brisbane and 40 minutes from the popular Noosa Heads.

This year’s Muster runs from Thursday 22 August to Sunday 25 August and the several compelling reasons to attend have just been revealed: namely, the announcement of headliners Kasey Chambers, The McClymonts and James Blundell.

They’ll be joined by fan favourites Luke O’Shea and Felicity Urquhart (who is the 2019 Gympie Muster Ambassador), as well as Tex Perkins and former INXS songwriter Andrew Farriss, who is making his country music debut (the full first line-up announcement appears below).

In addition to the main-stage action there will be intimate Songwriter Sessions, an all-star guitar-shredding jam, line and rock ’n’ roll dancing and instrument workshops.

One ticket price gives Muster attendees free camping and multi-venue access. Run by the community, for the community, the Muster is a not-for-profit charity event which has raised in excess of $15 million for charities Australia wide since its inception.

For more information, and tickets, go to www.muster.com.au.

More to be announced soon