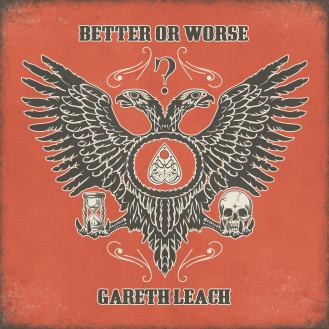 Singer-songwriter Gareth Leach released his debut album Death & Taxes in 2018, and for those who haven’t yet heard it, new single ‘Better or Worse’ is a great introduction to Leach’s unstinting lyrics and heartfelt vocals, and his country/alt-rock sound. The song was a TSA Awards Semi-finalist ‘Best Alt-Country Song’ this year and, as Leach says, it’s about ‘dealing with living with your own high expectations of “what this life is supposed to be”.’

The song has what Leach calls an ‘outlaw guitar riff’, and that riff not only sets up the mood of the song but calls in the listener. That riff led Leach to go in search of a lyric that could suit it, and in his notebook he found something he’d written a month or so earlier: Tell me is it getting better or is it getting worse?

If the vocals sound like they’re coming from an authentic place, it’s because, as each Leach says, they come from ‘a very real and personal conversation that I was, and continue having with myself. For me in my own songwriting, music can either act as therapy or bring issues to light that I am not consciously aware of until writing it down.’

Watch the video for ‘Better or Worse’ below:

Death & Taxes is out now.