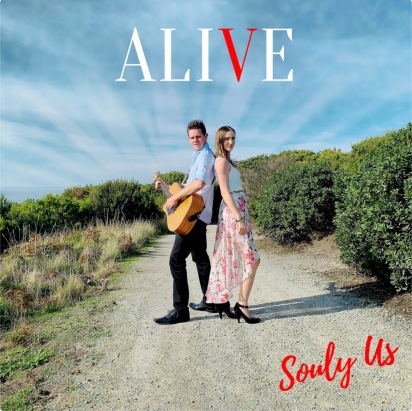 Souly Us is a young duo from coastal Victoria, with members Kate Appleyard and Ben Mawdsley. They first starting playing together in January 2018, performing cover songs from a variety of modern country musicians and pop artists. It didn’t take them long – about two months – to start writing original songs, and they were soon on a plane to Nashville to experience it for themselves.

Their first single, Meant to Be’ was released 2018; it received airplay on radio stations around Australia and took home the 2019 APRA AMCOS New Songwriter of the Year from the Tamworth Songwriters Association.

Their EP HELLO WORLD was released in January 2019 and debuted at No. 5 on the iTunes Country Music Charts.

Now they have a brand new song, the uplifting ‘Alive’, which showcases their country and pop knowledge and skills. Ben Mawdsley says the chords for the song ‘just came out of nowhere but when I had them, I knew that it could be a great song. Kate put pen to paper and before we knew it, we had a song that would lift anybody’s spirits. And we realised it had to be the title track of our debut album too.’

Mawdsley recorded and produced the single himself in their home in southern Victoria; it was mixed by ARIA and CMAA award-winning producer Matt Fell at Love HZ Studios in Sydney and mastered by Grammy-winner William Bowden.

The single is making its premiere on this site today, along with its video, which the band produced and directed themselves.

Souly Us have made a great impact on Australian country music in a short time, and ‘Alive’ – which is the loveliest kind of ear worm! – will surely win them more fans.

Listen to Souly Us on: