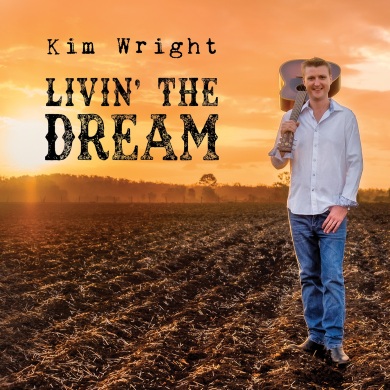 Kim Wright is a singer-songwriter from Ipswich in Queensland, and his new EP, Livin’ the Dream, debuted at number 2 on the iTunes Country album chart. Its six songs are in a honky tonk style and three of them were written when Wright was still in his teens, while ‘Man of the House’ was penned more recently with Allan Caswell and ‘This Old Bar’ with Liam Kennedy-Clark. The latter produced the EP, which features musiciansMichel Rose, Glen Hannah, Lawrie Minson, Kurt Baumer, Pete Denahy, Roger Corbett, Angus Woodhead, and Joshua Blaikie, as well as Kennedy-Clark.

The EP’s title comes from Wright’s belief that ‘every day above ground’s a good one and I believe you should live each day to its fullest’, and it’s safe to say that listening to this EP will help the listener do just that. Wright often sounds like he’s having the time of his life on these tracks, and his enjoyment is infectious. The songs are tightly written and some sound like they are made to dance to – which probably makes this EP a party record, of sorts, except the EP is also worth sitting back and listening to, with its mix of seriousness and lightheartedness, and the last track, ‘Home’, providing a sweetly sad finish. Overall this is an upbeat offering that will put a smile on your face, cause your toes to tap and probably have you spontaneously jigging on the spot. And given Wright’s philosophy, that seems wonderfully appropriate.

Listen to Livin’ the Dream on: