Daisy Spratt is a singer-songwriter living in Melbourne who has been making a splash not just in her home town but in Nashville, where she usually visits twice a year, although she’s only made it there once this year. Each visit sounds like it is jam packed.

‘I do a lot of co-writes when I’m there,’ says Daisy. ‘This trip round [in July] I did quite a few co-writes. We wrote and recorded “Think Again Boy” while we were there as well. And a lot of meet-and-greets. Meetings and introducing yourself to lots of different people. They keep me busy while I’m there. And I did a photo shoot while I there as well. So we try to smash out as much as we can in one hit.’

‘Think Again Boy’ is Spratt’s new single, and she wrote it with Brandon Hood on her most recent trip – the same trip when she recorded it.

‘I wrote it during a time when I felt kind of underestimated and people underestimated me, I guess, as a muso,’ she explains, ‘and people are very quick to judge purely by looking at you. So we created this storyline about a girl at a bar and there’s a guy trying to hit on her and buy her a drink, but he doesn’t even know who she is. It’s a “Why would you buy her a drink and you just don’t even know her?” sort of thing. It’s a very female oriented song, trying to be sort of empowering – “you don’t know me, I can do my own thing, I can be here and being who I am without you trying to pretend that you know me”. So that was the idea behind it and then it ended up turning it to this really, really fun song.’

During that Nashville trip Spratt had no plans to record – ‘it was more just cowrites, a lot of networking, doing the photo shoot and video shoot while we were there and rolling out a bunch of marketing,’ she says. ‘But we were there and started networking and my mum came with me – she sort of manages me a little bit. She said, “Nup, we need to record something while we’re here because we’re going to miss the opportunity.” So we just quickly got onto it.’

Spratt also released a self-titled EP last year – although at seven songs, it does seem to be a very generously sized EP. ‘I probably could have called it an album, but I didn’t,’ she says with a laugh.

Spratt’s musical direction was influenced by her upbringing. She was born in Queensland but grew up in the Midwest and South of the USA.

‘So I was surrounded by a lot of country, Nashville music,’ she says, ‘and a lot of Christian gospel music as well. So that all played a huge role in my interest in getting involved in guitar. I started playing guitar when I was about 10, and my dad and I used to play together. He used to show me chords and teach me different songs.’

Kenny Chesney and Shania Twain were two artists she listened to regularly, and ‘Keith Urban was on the scene then when I was kid. We used to listen to, I think it was his first album that came out at that point.

‘I started to get into a lot of punk rock and American punk when I was about 10 and 11. Green Day, Simple Plan, all those sort of bands, even though they had nothing to do with country music. I listened to them nonstop. Then I got back into my country songs and listening to that sort of stuff in my late teens.’

While Spratt played guitar from the age of 10, she didn’t start singing until she was 13 – although not for lack of interest in it.

‘I always liked singing,’ she says, ‘but people always made fun of me that I was really bad. So I never really pursued it. But I picked up really quickly with guitar, I loved it.

‘But I was singing just for fun one day, with some friends when I was, I think it was 12 or 13, and they said, “Oh, you’re actually not bad. You should totally get some singing lessons.” And that was enough to give me the confidence to start getting professional lessons. But I wasn’t that good at that point. A lot of it was just technique and wanting to get confident in front of an audience.’

These days, ‘I do consider myself a singer first. I play guitar, I can play basic chords and notes and stuff with my eyes closed, and I can read notation fairly well, but I personally think that my singing is probably a lot stronger than my guitar skills. I’m definitely not a Keith Urban on electric,’ she says, laughing.

‘They’re super supportive,’ she says, ‘but we laugh about it now because I sang a Missy Higgins song and apparently I sang every note flat – but I did it really confidently! I’ve definitely grown a lot since then.’

After that first performance, Spratt says ‘I used to sing very quite mumbly and folky. Maybe you could compare it to an Angus and Julia Stone sort of vibe. And then as I grew, I did have to learn how to project and how to build my range and all that sort of stuff to do what I do now.’

These days Spratt has a powerful country rock/pop voice, which is just the right fit for the feisty lyrics of ‘Think Again Boy’, which melds the country and pop genres with its pop hooks and country instrumentation.

Spratt plays regularly in and around Melbourne. ‘I used to play a lot down on the peninsula because I used to live down there, Cranbourne, Frankston area. I used to play Mornington lot, but I’m starting to play a lot more in the CBD and Fitzroy, Brunswick.’ While many shows have featured Spratt and her guitar alone, she’s currently looking for band members because she enjoys playing with a full band. 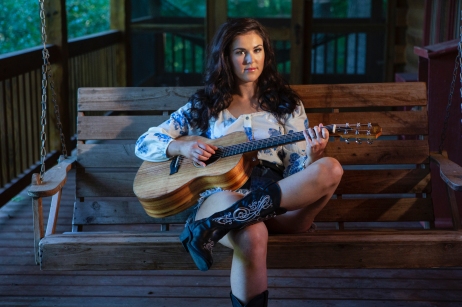 The responsibility of looking for those band members is hers because, as an independent artist, she is running her own show.

‘You have to put on so many different hats,’ she says. ‘You’ve got your business hat on one day and you’re answering emails and then you’ve got to do the interviews. So you being the artist and representing the brand and then doing all this social media stuff, when usually, if you’ve got a label behind you or a big enough team, they’d try and run all of that for you and then you can just focus on all the music stuff. So it can get a little bit overwhelming. But there’s definitely the advantage because I guess you get full control and full say over everything as well. You can make the call and what you do and don’t want to do.’

One of the things that Spratt did want to do was submit some of her songs for consideration to be included on the Tiger Airways in-flight entertainment.

‘A friend of mine is a hostess on Tiger and I think it was maybe two years ago, she said, “They’re running this competition, like, why don’t you just submit some of these songs?” If they liked the songs they might end up airing them on their flights. I said, “Oh, sure, why not?” So I put through two of my songs – “Love Like That” and “Soda Pop”. I didn’t win the number one prize or whatever it was, but they ended up liking them so much they aired them for 12 months, and then leading into the finish of that contract apparently passengers really liked the songs. So they sent me another email and ask if they could continue playing it pretty much indefinitely. I said yeah, that’s fine. I was literally flying with Tiger last weekend, just gone and they play my songs on there. So it’s kind of weird sitting there thinking, Oh yeah, that’s me.’

While Spratt’s songs are playing in the air, she’s looking ahead to creating new music – some new singles, as singles are the format that works best in this streaming era.

‘But I would love to do an album,’ she says, ‘even if it’s 12 or 13 songs on one album, it would just be so much fun to work on a bigger project. It’s more of a challenge for me. But there will probably be a lot more singles before I get to that point, I think.’

Tamworth Country Music Festival is also ahead of her. ‘I think we’re doing a big road trip with my mum and my sisters,’ she says. ‘We arrive on the 18th of January and then we’ll be there right through and finish around Australia Day. I’ve got a couple of gigs booked and still in the process of getting a couple more booked. So I’m busy while I’m up there.’

Spratt will also make time to see who else is playing at the festival, saying, ‘I do like to make the time to go and go watch other gigs, and I usually will chat to a couple of the musos if I really liked their stuff, or hang out. Or we’ll exchange emails and follow each other on Instagram. I like to support people in that way because I know what it’s like being unsigned and independent, trying to do this journey kind of on your own.’

Between playing shows, writing, recording, travelling and managing the business of being an independent artist, Spratt has never lost sight of what brought her to this work in the first place.

‘I definitely haven’t lost the passion,’ she says, ‘even though like it does get crazy with the working side of things. And the bigger you get the more traction you gain, you start to go on tours and you start to have staff and you start having to work that sort of business side of things more. But I don’t think I’ll ever lose my passion for it. And you have to make time for it too. I’m married so it’s kind of like I’m constantly relighting that romance flame, but with the music, and just putting the time aside to write and to also have inspiration from other people and hang out with people who love it just as much as you do.’

It’s a wonderful perspective on creative work, and creative life, and given the music Spratt has released so far, and her plans for the future, she is successfully tending that flame.

Jemma Beech is a singer-songwriter now living in the Hunter Valley region of New South Wales but for a while she lived in the Pilbara region of Western Australia, driving hours to play gigs in between driving dump trucks in the mines. Her experiences there shaped her as a performer and a songwriter, and since the 2018 release of her debut album That's Just Me she has been working on new music. Her latest single is the light-hearted 'You Fool', a sweetly self-deprecating take on a love song, and we spoke about that - and about dump trucks.More about Jemma Beech: https://www.jemmabeech.com.au/More Australian country music interviews and reviews: https://sunburntcountrymusic.com/ Hosted on Acast. See acast.com/privacy for more information.
Join 195 other followers