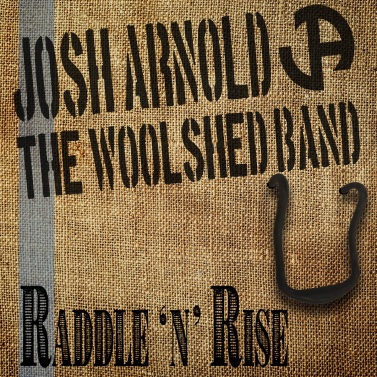 Josh Arnold is a Golden Guitar-winning country music artist who of late has been focused on taking music to communities around Australia rather than releasing new recordings. Now, though, he has a new band and a new EP, Raddle ‘n’ Rise, which contains six songs written by Arnold, who grew up around shearing sheds and documents the shearer’s life and the culture of the woolshed, and other aspects of working the land, on this EP.

Lyrically these are songs in the lineage of bush ballads as well as some of Troy Cassar-Daley’s work (such as ‘Born to Survive), amongst others. The life and lifestyle they document are tough and gritty; Arnold’s voice, by some contrast, can have a lovely smoothness to it that brings the listener close and gives the songs the feeling of a confessional rather than a manifesto, although there’s a bit of that to them as well.

Country music has its roots, of course, in life on the land and also in songs of work. That makes these songs classic country music, in their way, although they’d also have a place as drinking songs, campfire songs and driving songs. Their driving tempo suggests the hard, relentless nature of the shearer’s life – of rural life – and also a determination to get through the toughness and find the sweeter side, even if that’s elusive.

The last song, ‘Convict’, could be seen as the odd one out, lyrically, as it’s the story of an Irish convict sent to the colony, but it fits with the others tonally and in the sense that it’s also about a hard life, although musically it owes more to Celtic folk than country music.

All six songs have layers that reveal themselves with repeated listening. Yes, they could be great songs to play on your road trip and let the beat carry you along. But it is clear that Arnold’s experience with using music to communicate with and to all sorts of people have seen him develop very fine writing skills that make these songs not just interesting but irresistible.