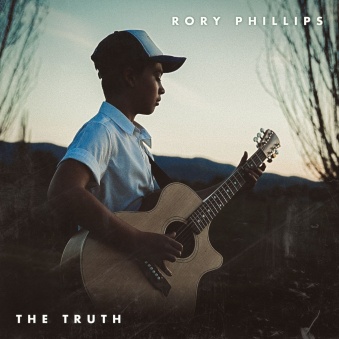 One of the great things about Australian country music is that artists emerge at all ages. There is not an expectation, from the audience or other artists, that your work is only valuable if it’s produced within a certain time of your life. This means, obviously, that within the canon of Australian country music there are many different perspectives of life from the teens up, just as there are commonalities because we’re all human.

Part of the challenge for any artist is that there is so much music of high quality within the genre that, regardless of your age, you have to be good. So it’s not because Rory Phillips is thirteen years old that his new song, ‘The Truth’, is worth listening to – it’s because it’s a great song. Co-written with Roger Corbett of The Bushwhackers, who also produced the song, it is forthright, heartfelt and clear. If that sounds improbably for one so young, it’s worth bearing mind that Phillips has twice attended the CMAA Junior Academy of Country Music, is a graduate of Rock Academy Melbourne, a member of Folk Alliance Australia and of the Bidgee Blues Club. He’s twice been named in the top ten buskers at the (open age) Tamworth Country Music Festival Busking Competition (2016/2017), been a featured busker at Byron Bay Bluesfest (2016/2017), named the Australian National Busking Champion 2016 (primary-aged) and Junior Tamworth Champion of Champions in 2018 and most recently; he was a semi-finalist in the 2020 NSW/ACT Young Achiever Awards (Performing Arts Award category) and the Snowy Valleys Council Young Citizen of the Year 2020.

While the song works in and of itself, Phillips’s age gives an additional reason to listen to it because, while there are younger artists releasing music, there aren’t that many of them and his perspective on the world is important.

In writing the song Phillips – who lives in Tumut in the NSW Snowy Mountains – was inspired by the likes of Greta Thunberg and the School Strike 4 Climate movement.

‘It’s hard to explain,’ he says, ‘but I wanted to say something with this song.  Our family are very passionate waste warriors and I get so frustrated listening to world leaders dancing around climate change issues.  It seems so obvious to me that more needs to be done, before it’s too late.  I’m no Billy Bragg, but if I can influence anyone to think a little more about our environment, or to question climate change deniers with this song, I will feel like I have achieved something.’

The video for the song was produced by Red Dirt Road Productions’ Fanny Lumsden and Dan Stanley Freeman, who also live in the Snowy Mountains, and was shot around Tumut.